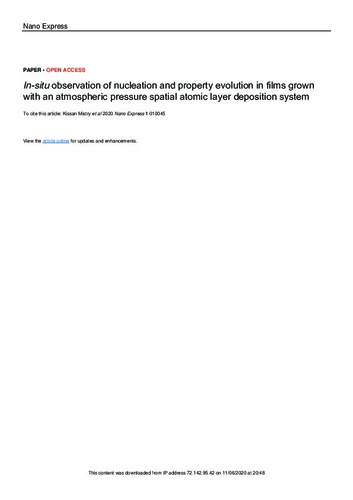 Atmospheric pressure—spatial atomic layer deposition (AP-SALD) is a promising open-air deposition technique for high-throughput manufacturing of nanoscale films, yet the nucleation and property evolution in these films has not been studied in detail. In this work, in situ reflectance spectroscopy was implemented in an AP-SALD system to measure the properties of Zinc oxide (ZnO) and Aluminum oxide (Al2O3) films during their deposition. For the first time, this revealed a substrate nucleation period for this technique, where the length of the nucleation time was sensitive to the deposition parameters. The in situ characterization of thickness showed that varying the deposition parameters can achieve a wide range of growth rates (0.1–3 nm/cycle), and the evolution of optical properties throughout film growth was observed. For ZnO, the initial bandgap increased when deposited at lower temperatures and subsequently decreased as the film thickness increased. Similarly, for Al2O3 the refractive index was lower for films deposited at a lower temperature and subsequently increased as the film thickness increased. Notably, where other implementations of reflectance spectroscopy require previous knowledge of the film's optical properties to fit the spectra to optical dispersion models, the approach developed here utilizes a large range of initial guesses that are inputted into a Levenberg-Marquardt fitting algorithm in parallel to accurately determine both the film thickness and complex refractive index.