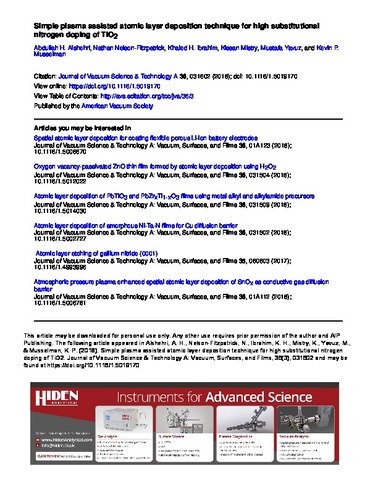 In this work, a plasma assisted atomic layer deposition system was used to deposit nitrogen-doped titanium dioxide. A simple approach was developed that requires only a nitrogen plasma and short plasma exposure times to effectively dope TiO2. A range of nitrogen concentrations were achieved by varying the flow rate and exposure times of nitrogen and oxygen plasmas. A nitrogen content as high as 23 ± 0.5 at. % was observed when only the nitrogen plasma was used. It was also possible to vary the type of nitrogen doping from almost entirely interstitial to purely substitutional, as measured by x-ray photoelectron spectroscopy. Ultraviolet-visible spectroscopy measurements showed a shifting in the absorption edge from 350 to 520 nm with doping, indicating bandgap narrowing from 3.1 to 1.9 eV.