Importance of regional variation in conservation planning: a rangewide example of the Greater Sage‐Grouse 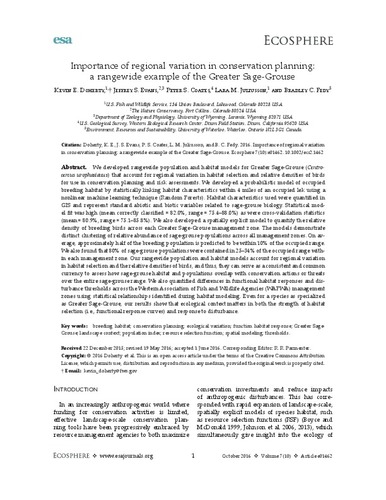 Abstract We developed rangewide population and habitat models for Greater Sage?Grouse (Centrocercus urophasianus) that account for regional variation in habitat selection and relative densities of birds for use in conservation planning and risk assessments. We developed a probabilistic model of occupied breeding habitat by statistically linking habitat characteristics within 4 miles of an occupied lek using a nonlinear machine learning technique (Random Forests). Habitat characteristics used were quantified in GIS and represent standard abiotic and biotic variables related to sage?grouse biology. Statistical model fit was high (mean correctly classified = 82.0%, range = 75.4?88.0%) as were cross?validation statistics (mean = 80.9%, range = 75.1?85.8%). We also developed a spatially explicit model to quantify the relative density of breeding birds across each Greater Sage?Grouse management zone. The models demonstrate distinct clustering of relative abundance of sage?grouse populations across all management zones. On average, approximately half of the breeding population is predicted to be within 10% of the occupied range. We also found that 80% of sage?grouse populations were contained in 25?34% of the occupied range within each management zone. Our rangewide population and habitat models account for regional variation in habitat selection and the relative densities of birds, and thus, they can serve as a consistent and common currency to assess how sage?grouse habitat and populations overlap with conservation actions or threats over the entire sage?grouse range. We also quantified differences in functional habitat responses and disturbance thresholds across the Western Association of Fish and Wildlife Agencies (WAFWA) management zones using statistical relationships identified during habitat modeling. Even for a species as specialized as Greater Sage?Grouse, our results show that ecological context matters in both the strength of habitat selection (i.e., functional response curves) and response to disturbance.