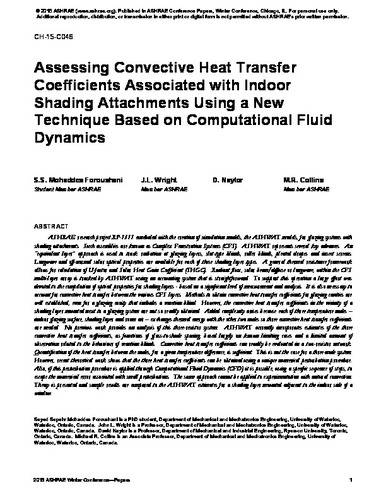 ASHRAE research project RP-1311 concluded with the creation of simulation models, the ASHWAT models, for glazing systems with shading attachments. Such assemblies are known as Complex Fenestration Systems (CFS). ASHWAT represents several key advances. An “equivalent layer” approach is used to track radiation at glazing layers, slat-type blinds, roller blinds, pleated drapes and insect screens. Longwave and off-normal solar optical properties are available for each of these shading layer types. A general thermal resistance framework allows for calculation of U-factor and Solar Heat Gain Coefficient (SHGC). Radiant flux, solar beam/diffuse or longwave, within the CFS multi-layer array is tracked by ASHWAT using an accounting system that is straightforward. To support this operation a large effort was devoted to the compilation of optical properties for shading layers - based on a significant level of measurement and analysis. It is also necessary to account for convective heat transfer between the various CFS layers. Methods to obtain convective heat transfer coefficients for glazing cavities are well established, even for a glazing cavity that includes a venetian blind. However, the convective heat transfer coefficients in the vicinity of a shading layer mounted next to a glazing system are not so readily obtained. Added complexity arises because each of three temperature nodes – indoor glazing surface, shading layer and room air – exchanges thermal energy with the other two nodes so three convective heat transfer coefficients are needed. No previous work provides an analysis of this three-resistor system. ASHWAT currently incorporates estimates of the three convective heat transfer coefficients, as functions of glass-to-shade spacing, based largely on known limiting cases and a limited amount of observation related to the behaviour of venetian blinds. Convective heat transfer coefficients can readily be evaluated in a two-resistor network. Quantification of the heat transfer between the nodes, for a given temperature difference, is sufficient. This is not the case for a three-node system. However, recent theoretical work shows that the three heat transfer coefficients can be obtained using a unique numerical perturbation procedure. Also, if this perturbation procedure is applied through Computational Fluid Dynamics (CFD) it is possible, using a specific sequence of steps, to escape the numerical error associated with small perturbations. The same approach cannot be applied to experimentation with natural convection. Theory is presented and sample results are compared to the ASHWAT estimates for a shading layer mounted adjacent to the indoor side of a window.