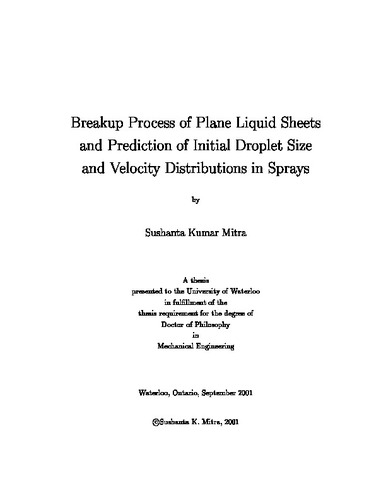 Spray models are increasingly becoming the principal tools in the design and development of gas turbine combustors. Spray modeling requires a knowledge of the liquid atomization process, and the sizes and velocities of subsequently formed droplets as initial conditions. In order to have a better understanding of the liquid atomization process,the breakup characteristics of plane liquid sheets in co-flowing gas streams are investigated by means of linear and nonlinear hydrodynamic instability analyses. The liquid sheet breakup process is studied for initial sinuous and varicose modes of disturbance. It is observed that the sheet breakup occurs at half-wavelength intervals for an initial sinuous disturbance and at full-wavelength intervals for an initial varicose disturbance. It is also found that under certain operating conditions, the breakup process is dictated by the initial varicose disturbance compare to its sinuous counterpart. Further, the breakup process is studied for the combined mode and it is found that the sheet breakup occurs at half- or full-wavelength intervals depending on the proportion of the individual sinuous and varicose disturbances. In general, the breakup length decreases with the increase in the Weber number, gas-to-liquid velocity and density ratios. A predictive model of the initial droplet size and velocity distributions for the subsequently formed spray is also formulated here. The present model incorporates the deterministic aspect of spray formation by calculating the breakup length and the mass-mean diameter and the stochastic aspect by statistical means through the maximum entropy principle based on Bayesian entropy. The two sub-models are coupled together by the various source terms signifying the liquid-gas interaction and a prior distribution based on instability analysis, which provides information regarding the unstable wave elements on the two liquid-gas interfaces. Experimental investigation of the breakup characteristics of the liquid sheet is performed by a high speed CCD camera and the measurement of the initial droplet size and distributions is conducted by phase-Doppler interferometry. Good agreement of the theoretical breakup length with the experiment is obtained for a planar, an annular and a gas turbine nozzle. The predicted initial droplet size and velocity distributions show reasonably satisfactory agreement with experimental data for all the three types of nozzles. Hence this spray model can be utilized to predict the initial droplet size and velocity distributions in sprays, which can then be implemented as a front-end subroutine to the existing computer codes.