Health and Risk Communication in Ontario Newspapers: The Case of Wind Turbines 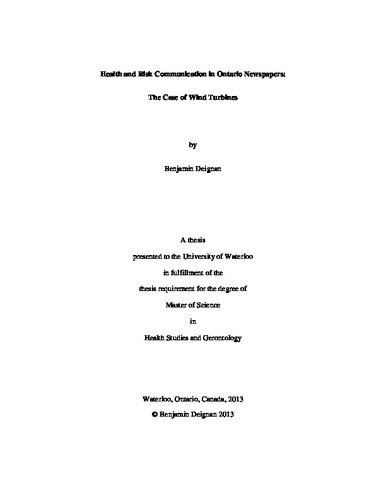 Introduction: The mass print media are a widely-distributed, and often primary, source of health information for the public. Health information in newspapers can amplify or attenuate readers’ perceptions of risk depending on how it is presented. This thesis examines how health information related to wind energy was communicated in Ontario newspapers and includes separate analyses for the presence of fright factors, readability, emergent themes, and emotional tone and sensationalism. As an emerging technology, public understanding of and response to associated health risks and uncertainties towards wind energy can be influenced by media coverage. Methods: Five geographically discontinuous wind energy installations in Ontario and their surrounding communities were selected based on 2006 Canadian Census data. Newspapers serving each community were identified and searched for articles from May 2007-April 2011 on the topic of health effects from wind energy developments. A total of 421 articles from 13 community and 4 national/provincial newspapers were retrieved. In Study #1, a directed content analysis was used to develop a coding instrument based on fright factors known to affect the public’s perception of risk. In Study #2, each newspaper article was analyzed for text readability using the Simple Measure of Gobbledygook (SMOG) readability formula. In Study #3, and as a qualitative component, a semi-directed content analysis was used to find emerging themes and subthemes. Finally, in Study #4, a list of loaded and positive words, informed from previous studies on sensationalism in media reporting and a random sample of newspaper articles included in this study, and the frequency of their appearance was used as a quantitative measure of sensationalism. Results: Study #1: The most commonly reported fright factors were ‘dread’, ‘poorly understood by science’, ‘involuntary exposure’, and ‘inequitable distribution’, occurring in 94% (n=394), 58% (n=242), 45% (n=188), and 42% (n=177) of articles, respectively. The fright factors of ‘dread’, ‘poorly understood by science’, ‘inequitable distribution’, and ‘inescapable exposure’ occurred more frequently in community newspaper articles than in national/provincial ones (p<0.001). Although the total number of occurrences of each fright factor increased following the Green Energy Act, only ‘dread’ (p<0.05) and ‘poorly understood by science’ (p<0.01) increased significantly. Study #2: The mean reading grade level (RGL) of 421 articles on wind turbines and health was at the post-secondary education level (X±SEM; 13.3±0.1). Articles from community and provincial newspapers were written at almost a full RGL lower (13.2±0.2 and 13.1±0.2) than those from national newspapers (13.9±0.2) (p<0.05). Additionally, opinion pieces such as editorial columns were written at a lower RGL than fact-based news articles (13.0±0.2 and 13.5±0.1, respectively; p<0.01). Study #3: The majority of newspaper articles described health effects of wind turbines in general, rather than specific, terms. The most commonly cited causes of health complaints were inadequate setbacks (27%, n=114), noise (21%, n=90), shadow flicker and vibrations (12%, n=49), and electrical exposure (6%, n=27). Other, non-health concerns such as environmental damage (28%, n=117), property values (20%, n=86), aesthetic concerns (18%, n=77), financial burden (18%, n=74), were prevalent and juxtaposed with health issues in 28% of articles (n=118). Concerns with the quality and availability of scientific evidence were frequent in the newspaper articles (34%, n=143), with many articles promoting a moratorium on wind energy developments until further research is conducted (25%, n=103). Study #4: Newspaper articles emphasized negative rather than positive/neutral tone, with community newspapers publishing a higher proportion of negative articles than provincial or national newspapers (X2=6.11, df=1, p<0.05). Conclusion: These findings suggest that the health information related to wind turbines in Ontario newspapers contains a large quantity of fright factors that may produce fear and anxiety in readers, is written at a reading grade level that is too complex for the majority of the Ontario population to fully understand, contains inconsistent information on health effects that often links health concerns with non-health concerns, and is often negative in tone. The influence of the Ontario newspaper media on reader’s risk perceptions of wind energy in Ontario will be important to determine empirically.