Fairness through Legal Literacy: A Case for Active Involvement 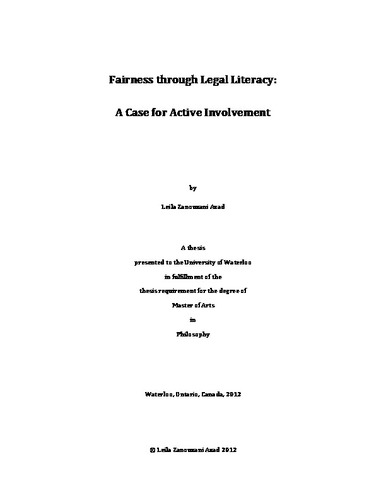 This thesis started with one question: “how could we make the legal system more fair for more people?” One possible answer is given to that question in the four chapters that follow: we can achieve a more fair and efficient legal system by providing our citizens with a basic level of legal literacy. That basic education includes a general knowledge of the structure and foundation of law, its content and purpose and finally the role of the people within political systems supporting different kinds of legal theories. I have argued that such education will increase people’s interest about legal matters while encouraging them to take a more active role with regards to legal matters. Often emphasized in this thesis is the role of interpretation within law. I’ve argued that the central role of interpretation in law could serve as an advantage for the citizens given that they sport the belief that they could bring out positive changes within their society and provided that they become motivated to take action based on that belief. The first step in achieving such changes is increasing legal literacy, an intricate part of which would be to show ordinary citizens the many subtlties that exist at different levels of law. People’s awareness of such subtleties accompanied with further institutional changes which would allow them to seek legal advice at an affordable rate and in different ways – as suggested in chapter four of this thesis - should help prevent many legal troubles from arising in the first place, thereby leading to a more fair and efficient legal state: one in which less injustice is seen and more resources are spent on issues that cannot be helped.