Challenges to and opportunities for implementing Smart Growth: A downtown Guelph case study 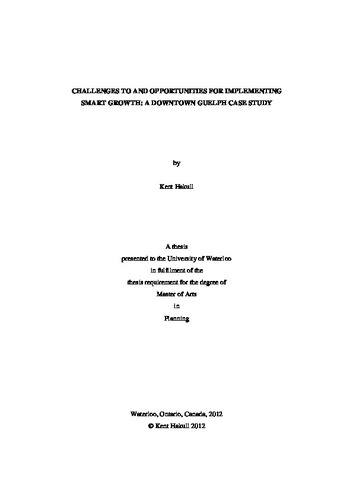 My research considers both the challenges to and opportunities for implementing Smart Growth strategies in the City of Guelph’s urban growth centre, with a particular focus on the St. Patrick’s Ward neighbourhood. I follow the development of the downtown secondary plan-making process, spanning the time period from March 2010 to June 2011, which includes public participation by residents in the St. Patrick’s Ward and the city at large. The plan-making process started prior to, and continues after, my chosen timeframe, but the information collected in my case study brings to light the complexity of drafting a secondary plan for implementing Smart Growth strategies; the plan should ideally establish a framework for local interpretation and implementation of Smart Growth – the widely supported intensification and redevelopment strategy. I take the view that while a plan can be written to code and be argued rationally by experts, its effectiveness and ethical validity is a function of public participation in planning decisions that include values-rational anchoring, i.e. critical and ethical reflection on the value of a goal. Although many guiding principles and recommendations in the draft Plan are based on Smart Growth strategies, the physical scale of urban intensification is today very much focused on density numbers under the Growth Plan for the Greater Golden Horseshoe. The City of Guelph’s draft Downtown Secondary Plan primarily seeks to facilitate high-density, mid- to high-rise condominium and/or office developments. This may in turn lead to increased spatial segregation based on socioeconomic differences. Like in Toronto, Guelph’s Downtown Secondary Plan deregulates zoning by-laws and reduces bureaucratic ‘red tape’ for the high-density development industry through more flexible policies. Potential socioeconomic consequences like displacement of entire populations, services, and jobs from the newly re-valued places are, however, not addressed in the Plan; the policy language and conceptual thinking appears primarily geared toward redevelopment and infill. The overall lesson learned from studying the plan-making process leading up to the City of Guelph’s 1st Draft Downtown Secondary Plan concerns the role of planning in implementing Smart Growth; being a specific form of urban planning, Smart Growth implementation requires facilitation and education of stakeholders who are willing to compromise, but not beyond the point where “smart” is removed from “growth”. Given the overarching responsibility of the government to drive home this message, every stakeholder working for the public interest must collaboratively define, steer, and direct the process and private interests at each and every step along the road. The case of Guelph demonstrates the difficulty of prioritizing such a responsibility. Thus, potential future pressures to push and undermine Smart Growth’s synergistic and public participatory core value must be monitored and controlled with long-term objectives in mind.