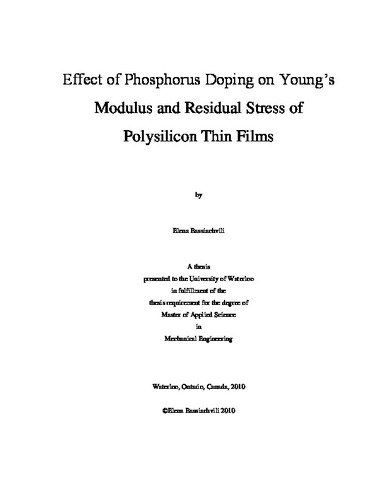 On-chip characterization devices have been used to extract the Young’s modulus, average stress and stress gradient of polysilicon doped with phosphorus using thermal diffusion. Devices for extracting the Young’s modulus, average stress and stress gradients have been designed to work within the range of expected material property values. A customized fabrication process was developed and the devices were fabricated. Static and resonant tests were performed using clamped-clamped and cantilever beams in order to extract material properties. The experimental setup and detailed experimental results and analysis are outlined within. Several doping concentrations have been studied and it has been concluded that the Young’s modulus of polysilicon doped for 2 hours increases by approximately 50GPa and the average stress of polysilicon doped for 2.5 hours becomes more tensile by approximately 63 MPa. It has also been found that short doping times can introduce a large enough stress gradient to create a concave up curvature in free-standing structures. This work was performed in order to determine the usability of doping as a means to increase the sensitivity of temperature and pressure sensors for harsh environments. It has been concluded that doping is a promising technique and is worth studying further for this purpose.