The Adoption of Residential Solar Photovoltaic Systems in the Presence of a Financial Incentive: A Case Study of Consumer Experiences with the Renewable Energy Standard Offer Program in Ontario (Canada) 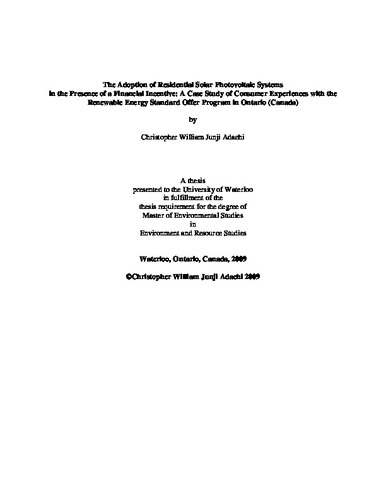 Traditionally, high initial capital costs and lengthy payback periods have been identified as the most significant barriers that limit the diffusion of solar photovoltaic (PV) systems. In response, the Ontario Government, through the Ontario Power Authority (OPA), introduced the Renewable Energy Standard Offer Program (RESOP) in November, 2006. The RESOP offers owners of solar PV systems with a generation capacity under 10MW a 20 year contract to sell electricity back to the grid at a guaranteed rate of $0.42/kWh. While it is the intent of incentive programs such as the RESOP to begin to lower financial barriers in order to increase the uptake of solar PV systems, there is no guarantee that the level of participation will in fact rise. The "on-the-ground" manner in which consumers interact with such an incentive program ultimately determines its effectiveness. The purpose of this thesis is to analyze the relationship between the RESOP and solar PV system consumers. To act on this purpose, the experiences of current RESOP participants are presented, wherein the factors that are either hindering or promoting utilization of the RESOP and the adoption of solar PV systems are identified. This thesis was conducted in three phases – a literature review, preliminary key informant interviews, and primary RESOP participant interviews – with each phase informing the scope and design of the subsequent stage. First, a literature survey was completed to identify and to understand the potential drivers and barriers to the adoption of a solar PV system from the perspective of a consumer. Second, nine key informant interviews were completed to gain further understanding regarding the specific intricacies of the drivers and barriers in the case of Ontario, as well as the overall adoption system in the province. These interviews were conducted between July and September, 2008. Third, interviews with 24 RESOP participants were conducted; they constitute the primary data set. These interviews were conducted between November and December, 2008. Findings of this thesis suggest that the early adopters of solar PV systems have been motivated by their self-identified sustainability-oriented social attitudes, rather than the lowering of the financial barrier. Only six of 24 respondents noted that they would not have purchased a solar PV system in the absence of the RESOP. For nine of 24 respondents, the catalyst for the purchase of the solar PV systems was not the creation of the RESOP, but instead the presence of a community-based co-operative purchasing group (CBCPG) that had selected a vender and that provided a support service to help the consumer navigate the administrative processes associated with the RESOP. Regarding the functioning of the RESOP, interview respondents reported lengthy periods of time to secure electrical connection, hidden additional fees, and arduous administrative processes. Based on their experiences interacting with Local Distribution Companies, vendors, and the OPA, respondent evaluations of the overall adoption process ranged from extremely positive (some interviewees praised the RESOP for its ease of participation and utility), to extremely negative (other interviewees condemned the RESOP because of its administrative complexity and hidden costs and fees). A key finding from this research is that weaknesses in the administration and promotion of the RESOP have been mitigated by the presence of CBCPGs and third parties aiding consumers in the purchase, installation, administration, and connection of their solar PV system. Recommendations of this thesis include the creation of new and enhancement of existing CBCPGs, a simplification of the required administrative processes, and an increase in the rates of compensation.

Christopher Adachi (2009). The Adoption of Residential Solar Photovoltaic Systems in the Presence of a Financial Incentive: A Case Study of Consumer Experiences with the Renewable Energy Standard Offer Program in Ontario (Canada). UWSpace. http://hdl.handle.net/10012/4400