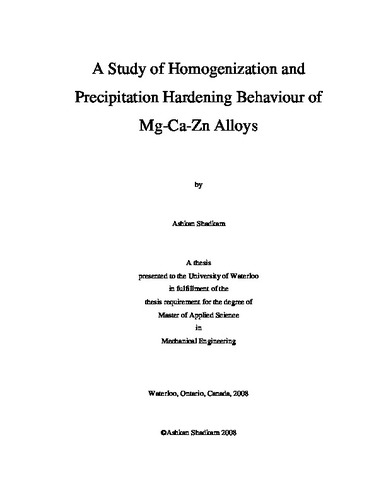 Microstructural evolution during heat treatment and the precipitation hardening response of Mg-Ca-Zn alloys were investigated. The binary Mg-2.5Ca alloy was chosen as the base alloy and the effects of adding one and two wt% zinc on the microstructural characteristics and precipitation hardening of the alloy system were studied. The as-cast microstructure of all three alloys showed dendritic solidification of α-Mg and the formation of the eutectic mixtures and/or multiple phases within the interdendritic regions. Homogenization heat treatment of the binary alloy removed the dendritic structure of α-Mg and spherodized the lamellar eutectic of α-Mg+Mg2Ca. Homogenization heat treatment in the ternary Mg-Ca-Zn alloys resulted in the formation of α-Mg grains with Mg2Ca and zinc-containing particles mainly dispersed along the grain boundaries. The EDS analysis suggested that zinc is incorporated in Mg2Ca particles. To study the precipitation hardening response of the alloys, homogenized alloys were aged at 175°C, 200°C and 220°C. At all three isothermal aging temperatures, the binary alloy showed only a slight increase in hardness, i.e. from 50 VHN in the homogenized state to approximately 53 VHN when peak aged. On the other hand, adding zinc was found to promote the age hardening response of the ternary alloys and caused the hardness to increase up to 70 VHN at the peak-aged condition. To further study the precipitation hardening behavior of the alloys, DSC and IC studies were conducted on the homogenized, as–quenched, alloys. The DSC result of the binary alloy showed only one exothermic heat effect, while the ternary alloys showed multiple exothermic peaks. Analysis of the DSC and IC traces, along with the evaluation of the slight increase in microhardness, suggested that non-coherent equilibrium precipitates formed in the aged binary alloy. In addition, it was suggested that the formation of coherent precipitates during aging can be the cause of the pronounced increase in hardness in the aged ternary alloys. The IC traces of the alloys were used to evaluate the kinetics of precipitation in the ternary alloys. It was concluded that increasing aging temperature from 175°C to 220°C greatly increased the precipitation rate. Finally the JMAK model was fit to the experimentally analyzed data for the evolution of the relative volume fraction of precipitates. It was found that the experimentally analyzed data was reasonably well described by the JMAK model. The corresponding JMAK kinetic parameters k and n were relatively close for the two ternary alloys at any aging temperature. The temperature dependence of k was modeled using the Arrhenius-type rate relationship. This analysis resulted in a smaller value for the apparent activation energy in the ternary alloy containing the higher zinc level, i.e. in Mg-2Ca-2Zn alloy.