Impacts on Metabolism and Gill Physiology of Darter Species (Etheostoma spp.) That Are Attributed to Wastewater Effluent in the Grand River 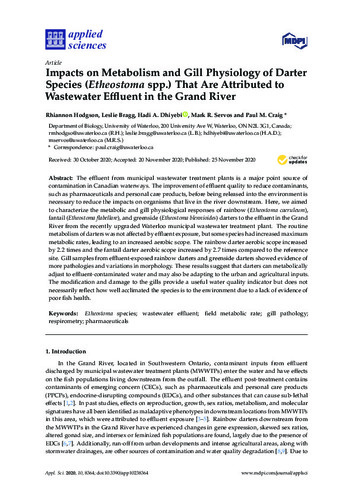 Impacts on Metabolism and Gill Physiology of Darter Species (Etheostoma spp.) That Are Attributed to Wastewater Effluent in the Grand River.pdf (2.435Mb)

The effluent from municipal wastewater treatment plants is a major point source of contamination in Canadian waterways. The improvement of effluent quality to reduce contaminants, such as pharmaceuticals and personal care products, before being released into the environment is necessary to reduce the impacts on organisms that live in the river downstream. Here, we aimed to characterize the metabolic and gill physiological responses of rainbow (Etheostoma caeruleum), fantail (Etheostoma flabellare), and greenside (Etheostoma blennioides) darters to the effluent in the Grand River from the recently upgraded Waterloo municipal wastewater treatment plant. The routine metabolism of darters was not affected by effluent exposure, but some species had increased maximum metabolic rates, leading to an increased aerobic scope. The rainbow darter aerobic scope increased by 2.2 times and the fantail darter aerobic scope increased by 2.7 times compared to the reference site. Gill samples from effluent-exposed rainbow darters and greenside darters showed evidence of more pathologies and variations in morphology. These results suggest that darters can metabolically adjust to effluent-contaminated water and may also be adapting to the urban and agricultural inputs. The modification and damage to the gills provide a useful water quality indicator but does not necessarily reflect how well acclimated the species is to the environment due to a lack of evidence of poor fish health.