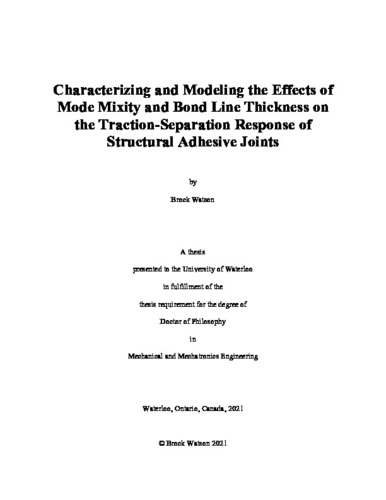 As adhesive bonding continues to become more prevalent in automotive structures, the need for high fidelity characterization and modelling of adhesive joints has gained in importance. In this thesis, new specimen geometry and analysis techniques are presented to characterize the properties necessary to model the traction-separation response in Mode I, Mode II, and mixed mode (MM) loading of adhesive joints using cohesive zone modelling (CZM) techniques. First, the Rigid Double Cantilever Beam (RDCB) geometry and analysis technique was developed to measure the full traction-separation response of a structural adhesive under Mode I loading. This test approach represents a substantial improvement over current test methodologies, where additional tests are required to extract the parameters necessary to construct the full traction-separation response. Next, the Bonded Shear Specimen (BSS) sample geometry was developed to measure the Mode II traction-separation response, using optical methods to measure separation. The BSS test was then adapted to allow for measurement of MM loading, providing the full traction-separation response for a range of mode mixity (ratio of shear to normal separation) and bond line thickness combinations. Statistically significant differences between the parameters necessary to construct the traction-separation response were found for different bond line thicknesses, identifying that bond line thickness should be accounted for in a generalizable CZM definition. With the full traction-separation response characterized for Mode I, Mode II and MM loading of nominal bond line thicknesses ranging from 0.18 mm to 0.64 mm, several deficiencies in current CZM implementations were identified. Critically, the MM traction-separation response is poorly predicted using conventional CZM implementations and the hardening response exhibited by the adhesive during Mode II and MM loading is not represented in current implementations. Validation testing was undertaken using more traditional Tapered Double Cantilever Beam (TDCB) and Single Lap Shear (SLS) test specimens to provide independent test data with which to assess CZM models integrating the characterization data from the RDCB, BSS and MM specimens. These validation tests were selected due to the well controlled nature of the Mode I (TDCB) and MM (SLS) loading. One limitation of these tests, however, is the large levels of elastic and plastic deformation of the adherends, making the measured force and displacement highly dependant on the adherend properties. To address the deficiencies identified in current CZMs, a new CZM modelling approach was developed, termed the Enhanced Mixed Mode Cohesive Zone Model (EMC). The benefit of the proposed ECM model was the integration of mode mixity and bond line thickness based on the measured experimental data. Using these data, the EMC model could predict the traction-separation response for any arbitrary mode mixity and bond line thickness combination rather than be inferred from relationships based on mixed mode energy release rates. Using this approach, in conjunction with the inclusion of the hardening behaviour observed experimentally, the MM traction-separation response was significantly improved relative to contemporary CZM implementations. Second, a single set of material parameters could be used to model bond line thickness and mode mixity effects, which is not possibly in current CZM approaches. Models of the RDCB, BSS and MM characterization tests using the EMC were shown to reduce the difference between the model predictions and measured traction and separation responses by more than half compared to a conventional CZM formulation. Unlike models of the characterization tests, the EMC models of the TDCB and SLS validation tests provided similar levels of fit to the test force, displacement and rotation data compared to a traditional CZM implementation, associated with large deflections and plastic deformation of the adherends, highlighting that important aspects of a CZM predictions can be masked depending on the load case for which the model is used. The EMC model provided the greatest benefit in load cases where less adherend deformation was present, which is important in cases where high strength materials are to be bonded, such as modern ultra high-strength steel automotive bodies-in-white. The traction-separation characterization methodology developed in this work led to the development of an improved CZM formulation, which demonstrated significant improvements in the ability to model the mechanical response of adhesive joints of various bond line thicknesses under Mode I, Mode II and mixed modes of loading.