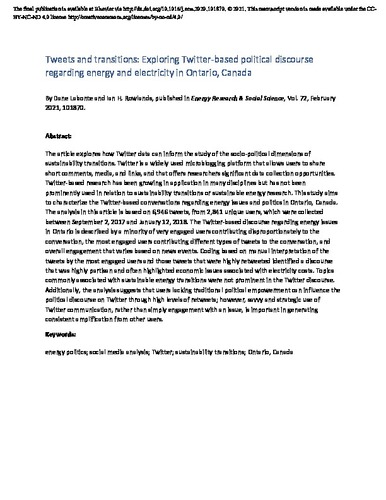 The article explores how Twitter data can inform the study of the socio-political dimensions of sustainability transitions. Twitter is a widely used microblogging platform that allows users to share short comments, media, and links, and that offers researchers significant data collection opportunities. Twitter-based research has been growing in application in many disciplines but has not been prominently used in relation to sustainability transitions or sustainable energy research. This study aims to characterize the Twitter-based conversations regarding energy issues and politics in Ontario, Canada. The analysis in this article is based on 6946 tweets, from 2841 unique users, which were collected between September 2, 2017 and January 12, 2018. The Twitter-based discourse regarding energy issues in Ontario is described by a minority of very engaged users contributing disproportionately to the conversation, the most engaged users contributing different types of tweets to the conversation, and overall engagement that varies based on news events. Coding based on manual interpretation of the tweets by the most engaged users and those tweets that were highly retweeted identified a discourse that was highly partisan and often highlighted economic issues associated with electricity costs. Topics commonly associated with sustainable energy transitions were not prominent in the Twitter discourse. Additionally, the analysis suggests that users lacking traditional political empowerment can influence the political discourse on Twitter through high levels of retweets; however, savvy and strategic use of Twitter communication, rather than simply engagement with an issue, is important in generating consistent amplification from other users.