Not so fast: Individual differences in impulsiveness are only a modest predictor of cognitive reflection 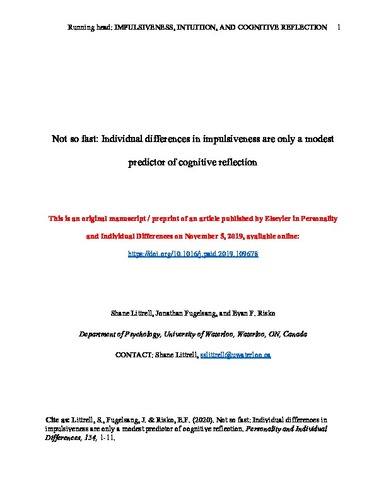 The extent to which a person engages in reflective thinking while problem-solving is often measured using the Cognitive Reflection Test (CRT; Frederick, 2005). Some past research has attributed poorer performance on the CRT to impulsiveness, which is consistent with the close conceptual relation between Type I processing and dispositional impulsiveness (and the putative relation between a tendency to engage in Type I processing and poor performance on the CRT). However, existing research has been mixed on whether such a relation exists. To address this ambiguity, we report two large sample size studies examining the relation between impulsiveness and CRT performance. Unlike previous studies, we use a number of different measures of impulsiveness, as well as measures of cognitive ability and analytic thinking style. Overall, impulsiveness is clearly related to CRT performance at the bivariate level. However, once cognitive ability and analytic thinking style are controlled, these relations become small and, in some cases, non-significant. Thus, dispositional impulsiveness, in and of itself, is not a strong predictor of CRT performance.