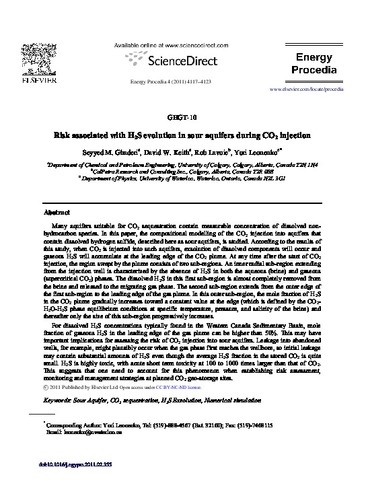 Many aquifers suitable for CO2 sequestration contain measurable concentration of dissolved non-hydrocarbon species. In this paper, the compositional modelling of the CO2 injection into aquifers that contain dissolved hydrogen sulfide, described here as sour aquifers, is studied. According to the results of this study, when CO2 is injected into such aquifers, exsolution of dissolved components will occur and gaseous H2S will accumulate at the leading edge of the CO2 plume. At any time after the start of CO2 injection, the region swept by the plume consists of two sub-regions. An inner radial sub-region extending from the injection well is characterized by the absence of H2S in both the aqueous (brine) and gaseous (supercritical CO2) phases. The dissolved H2S in this first sub-region is almost completely removed from the brine and released to the migrating gas phase. The second sub-region extends from the outer edge of the first sub-region to the leading edge of the gas plume. In this outer sub-region, the mole fraction of H2S in the CO2 plume gradually increases toward a constant value at the edge (which is defined by the CO2-H2O-H2S phase equilibrium conditions at specific temperature, pressure, and salinity of the brine) and thereafter only the size of this sub-region progressively increases. For dissolved H2S concentrations typically found in the Western Canada Sedimentary Basin, mole fraction of gaseous H2S in the leading edge of the gas plume can be higher than 50%. This may have important implications for assessing the risk of CO2 injection into sour aquifers. Leakage into abandoned wells, for example, might plausibly occur when the gas phase first reaches the wellbore, so initial leakage may contain substantial amounts of H2S even though the average H2S fraction in the stored CO2 is quite small. H2S is highly toxic, with acute short term toxicity at 100 to 1000 times larger than that of CO2. This suggests that one need to account for this phenomenon when establishing risk assessment, monitoring and management strategies at planned CO2 geo-storage sites.