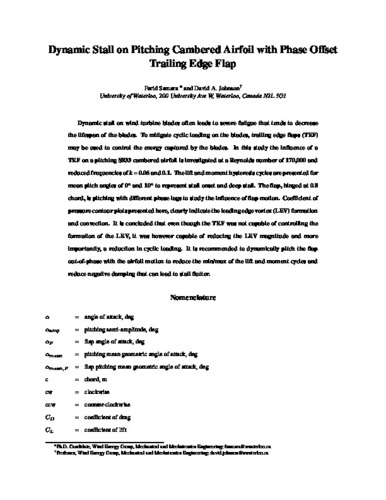 Dynamic stall on wind turbine blades often leads to severe fatigue that tends to decrease the lifespan of the blades. To mitigate cyclic loading on the blades, trailing edge flaps (TEF) may be used to control the energy captured by the blades. In this study the influence of a TEF on a pitching S833 cambered airfoil is investigated at a Reynolds number of 170,000 and reduced frequencies of k = 0.06 and 0.1. The lift and moment hysteresis cycles are presented for mean pitch angles of 0 deg and 10 deg to represent stall onset and deep stall. The flap, hinged at 0.8 chord, is pitching with different phase lags to study the influence of flap motion. Coefficient of pressure contour plots presented here, clearly indicate the leading edge vortex (LEV) formation and convection. It is concluded that even though the TEF was not capable of controlling the formation of the LEV, it was however capable of reducing the LEV magnitude and more importantly, a reduction in cyclic loading. It is recommended to dynamically pitch the flap out-of-phase with the airfoil motion to reduce the min/max of the lift and moment cycles and reduce negative damping that can lead to stall flutter.