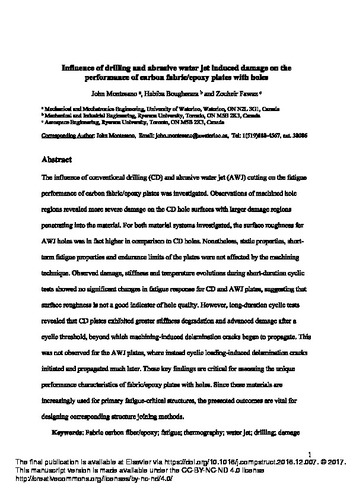 The influence of conventional drilling (CD) and abrasive water jet (AWJ) cutting on the fatigue performance of carbon fabric/epoxy plates was investigated. Observations of machined hole regions revealed more severe damage on the CD hole surfaces with larger damage regions penetrating into the material. For both material systems investigated, the surface roughness for AWJ holes was in fact higher in comparison to CD holes. Nonetheless, static properties, short-term fatigue properties and endurance limits of the plates were not affected by the machining technique. Observed damage, stiffness and temperature evolutions during short-duration cyclic tests showed no significant changes in fatigue response for CD and AWJ plates, suggesting that surface roughness is not a good indicator of hole quality. However, long-duration cyclic tests revealed that CD plates exhibited greater stiffness degradation and advanced damage after a cyclic threshold, beyond which machining-induced delamination cracks began to propagate. This was not observed for the AWJ plates, where instead cyclic loading-induced delamination cracks initiated and propagated much later. These key findings are critical for assessing the unique performance characteristics of fabric/epoxy plates with holes. Since these materials are increasingly used for primary fatigue-critical structures, the presented outcomes are vital for designing corresponding structure joining methods.