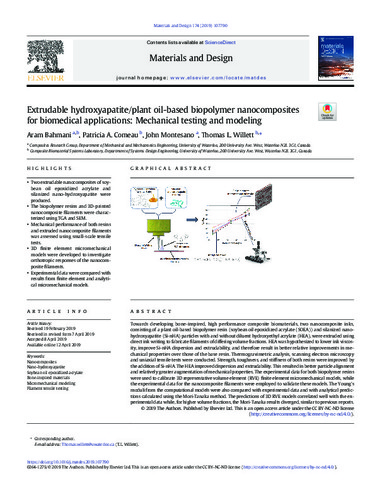 Towards developing bone-inspired, high performance composite biomaterials, two nanocomposite inks, consisting of a plant oil-based biopolymer resin (soybean oil epoxidized acrylate (SOEA)) and silanized nano-hydroxyapatite (Si-nHA) particles with and without diluent hydroxyethyl acrylate (HEA), were extruded using direct ink writing to fabricate filaments of differing volume fractions. HEA was hypothesized to lower ink viscosity, improve Si-nHA dispersion and extrudability, and therefore result in better relative improvements in mechanical properties over those of the base resin. Thermogravimetric analysis, scanning electron microscopy and uniaxial tensile tests were conducted. Strength, toughness, and stiffness of both resins were improved by the addition of Si-nHA. The HEA improved dispersion and extrudability. This resulted in better particle alignment and relatively greater augmentation of mechanical properties. The experimental data for both biopolymer resins were used to calibrate 3D representative volume element (RVE) finite element micromechanical models, while the experimental data for the nanocomposite filaments were employed to validate these models. The Young's moduli from the computational models were also compared with experimental data and with analytical predictions calculated using the Mori-Tanaka method. The predictions of 3D RVE models correlated well with the experimental data while, for higher volume fractions, the Mori-Tanaka results diverged, similar to previous reports.