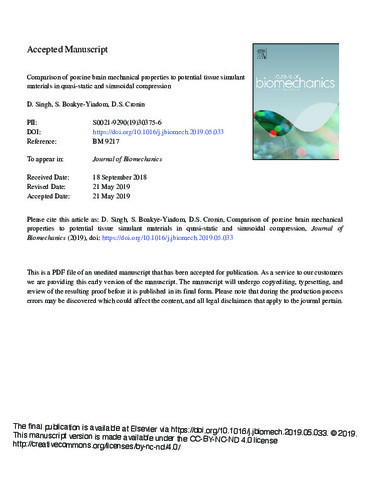 In both finite element and physical surrogate models of head blast injury, accurate material properties of the brain and/or tissue simulants are necessary to ensure biofidelity in predicted response. Thus, there is a need for experimental comparisons between tissue and simulant materials under the same experimental conditions. This study compares the response of porcine brain tissue and a variety of brain tissue simulants in quasi-static and sinusoidal compression tests. Fresh porcine brain tissue was obtained from a local abattoir and tested within 4 h post mortem. Additionally, the effect of post mortem time was investigated by comparing samples stored at room temperature and stored frozen (−18 °C), at various time intervals. The brain tissue simulants tested were bovine gelatin (3%, 5%, and 10% concentration), agarose gelatin (e0.4%, 0.6%, 0.8% concentration), and Sylgard 527. The experiments were performed using a DMA apparatus (TA Instruments Q800). The quasi-static compression data were fit to Ogden hyperelastic functions so that parameters could be compared. It was found that bovine gelatin at 3% and 5% concentration demonstrated the closest response to brain tissue in quasi-static compression. Conversely, in sinusoidal compression, the agarose gel and Sylgard 527 were found to be in closer agreement with the tissue, than bovine gel. In terms of post mortem time and storage, there was no statistically significant difference detected in the response of tissue samples after 48 h, regardless of storage method. However, samples stored at room temperature after 48 h appeared to demonstrate a reduction in stiffness.