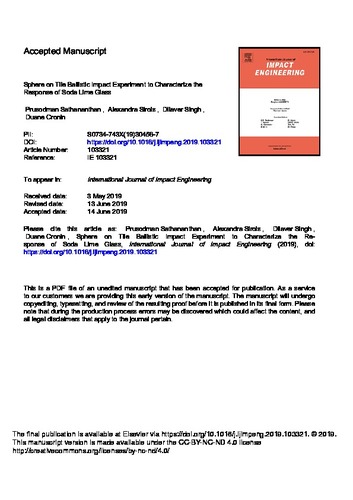 Robust computational models of soda-lime silicate glass (SLG) are used in the development of transparent armor systems, which require an independent set of experimental data with known boundary conditions for model validation. Although many experimental tests are presented in the literature, many of these tests incorporated complex boundary conditions or studied the impact of non-planar targets. A novel sphere on glass tile ballistic experiment was performed to quantify the damage features of planar impact, where an unconfined tile was impacted by a hardened steel sphere at velocities ranging from 100 m/s to 800 m/s. The impacts and resulting damage were recorded using high speed cameras. Projectile kinematics and damage front propagation were successfully quantified and shown to be repeatable. A broad range of material damage was captured, including discrete fracture features such as fracture cones, radial cracks, concentric cracks, and material comminution. Three distinct impact responses were identified; non-perforating (100–500 m/s), transition (500–550 m/s) and perforating (550–800 m/s) that showed a transition in failure mode from discrete fracture (damage front ∼1500 m/s) to comminution (damage front, 3270 m/s) of the tile upon impact. The sphere on glass tile tests provided a repeatable set of experimental data to enable future comparison of the ballistic response of transparent materials, while providing simple boundary conditions that can be used to validate computational models of SLG over a range of impact velocities.