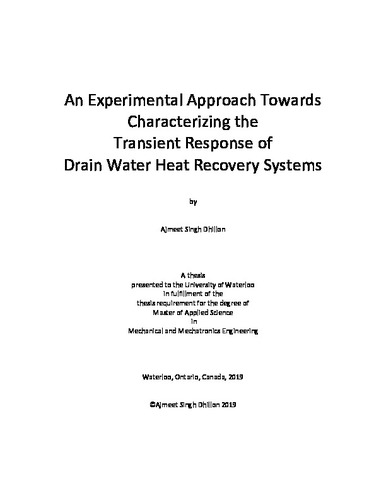 Drain Water Heat Recovery (DWHR) systems recover thermal energy from the gray water and use it to pre-heat incoming mains water. So far, the research conducted in this field has focused on the steady-state (SS) operation of DWHR systems. It has now become important to characterize the transient behaviour of DWHR systems, so that it could be included in energy simulation models. The ultimate focus of this thesis was to study the transient response of various DWHR systems, and in particular, to estimate the time it would take to reach quasi-steady-state operating conditions. The analysis was approached using two experimental methods. The first approach dealt with estimating the time dependent rate of heat recovery, based solely on the fluid inlet and outlet temperatures and flowrates. Correlations were used to estimate 63.2% and 86.5% steady-state time responses. The correlations were validated by performing random experiments. The predicted and experimental time responses were in good agreement. The second approach used infrared thermography to estimate fluid temperatures through the DWHR systems, along with estimating the time responses. This approach provided an estimation of energy storage in the DWHR during transient operation. The time responses derived by both methods were compared. It was found that both the 63.2% and 86.5% time responses increased with increasing DWHR system length and decreasing flowrate. The time responses estimated using infrared thermography were always a few seconds longer than the first approach. Recommendations were made to suggest ways to improve and build on the current work. One of the major recommendations was modification of the Heat Exchanger Test Platform (HXTP), to better facilitate transient experiments.