Harnessing catalytic pumps for directional delivery of microparticles in microchambers 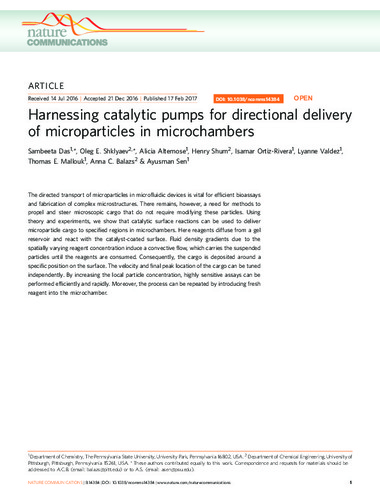 The directed transport of microparticles in microfluidic devices is vital for efficient bioassays and fabrication of complex microstructures. There remains, however, a need for methods to propel and steer microscopic cargo that do not require modifying these particles. Using theory and experiments, we show that catalytic surface reactions can be used to deliver microparticle cargo to specified regions in microchambers. Here reagents diffuse from a gel reservoir and react with the catalyst-coated surface. Fluid density gradients due to the spatially varying reagent concentration induce a convective flow, which carries the suspended particles until the reagents are consumed. Consequently, the cargo is deposited around a specific position on the surface. The velocity and final peak location of the cargo can be tuned independently. By increasing the local particle concentration, highly sensitive assays can be performed efficiently and rapidly. Moreover, the process can be repeated by introducing fresh reagent into the microchamber.

Except where otherwise noted, this item's license is described as https://creativecommons.org/licenses/by/4.0/