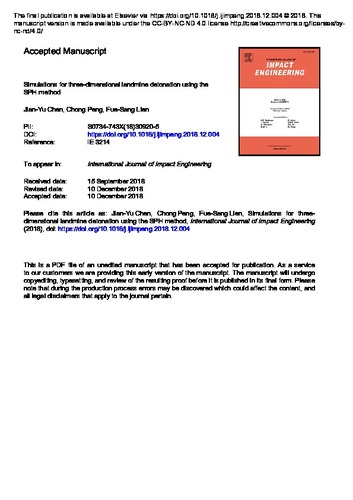 The simulation of the soil fragmentation under buried explosive detonation is an extremely difficult task. In this paper, the modified smoothed particle hydrodynamics method (SPH) in combination with the elastoplastic and hypoplastic constitutive models is introduced to simulate the three-dimensional (3D) landmine detonation for the first time. The modified continuity equation is incorporated to tackle the multiphase interfacial problems with high density ratios. The elastoplastic and hypoplastic constitutive models are employed to describe the soil mechanical behavior. Furthermore, the in-house SPH code is parallelized using the Open-MP program interface to solve problems with large number of particles efficiently. At the end, the simulation results are compared with the experimental data, which shows that the SPH method in conjunction with these two constitutive models can tackle landmine detonation problems involving large deformation very well.