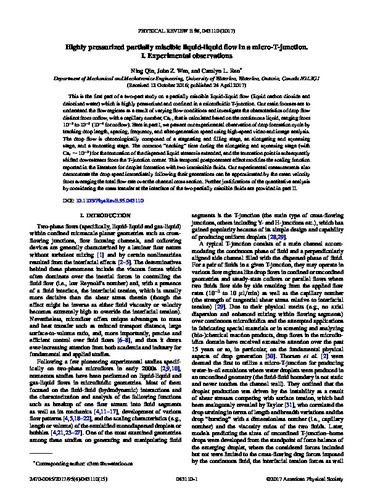 This is the first part of a two-part study on a partially miscible liquid-liquid flow (liquid carbon dioxide and deionized water) which is highly pressurized and confined in a microfluidic T-junction. Our main focuses are to understand the flow regimes as a result of varying flow conditions and investigate the characteristics of drop flow distinct from coflow, with a capillary number, Ca-c, that is calculated based on the continuous liquid, ranging from 10(-3) to 10(-2) (10(-4) for coflow). Here in part I, we present our experimental observation of drop formation cycle by tracking drop length, spacing, frequency, and after-generation speed using high-speed video and image analysis. The drop flow is chronologically composed of a stagnating and filling stage, an elongating and squeezing stage, and a truncating stage. The common "necking" time during the elongating and squeezing stage (with Ca-c similar to 10(-3)) for the truncation of the dispersed liquid stream is extended, and the truncation point is subsequently shifted downstream from the T-junction corner. This temporal postponement effect modifies the scaling function reported in the literature for droplet formation with two immiscible fluids. Our experimental measurements also demonstrate the drop speed immediately following their generations can be approximated by the mean velocity from averaging the total flow rate over the channel cross section. Further justifications of the quantitative analysis by considering the mass transfer at the interface of the two partially miscible fluids are provided in part II.