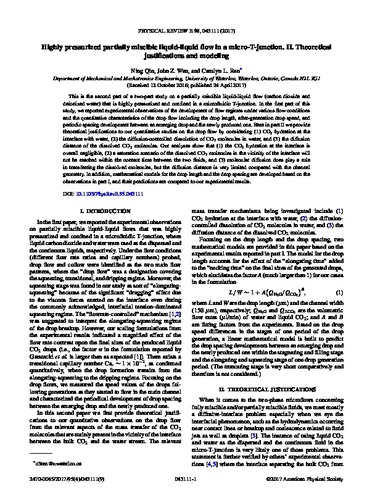 This is the second part of a two-part study on a partially miscible liquid-liquid flow ( carbon dioxide and deionized water) that is highly pressurized and confined in a microfluidic T-junction. In the first part of this study, we reported experimental observations of the development of flow regimes under various flow conditions and the quantitative characteristics of the drop flow including the drop length, after-generation drop speed, and periodic spacing development between an emerging drop and the newly produced one. Here in part II we provide theoretical justifications to our quantitative studies on the drop flow by considering ( 1) CO2 hydration at the interface with water, ( 2) the diffusion-controlled dissolution of CO2 molecules in water, and ( 3) the diffusion distance of the dissolved CO2 molecules. Our analyses show that ( 1) the CO2 hydration at the interface is overall negligible, ( 2) a saturation scenario of the dissolved CO2 molecules in the vicinity of the interface will not be reached within the contact time between the two fluids, and ( 3) molecular diffusion does play a role in transferring the dissolved molecules, but the diffusion distance is very limited compared with the channel geometry. In addition, mathematical models for the drop length and the drop spacing are developed based on the observations in part I, and their predictions are compared to our experimental results.