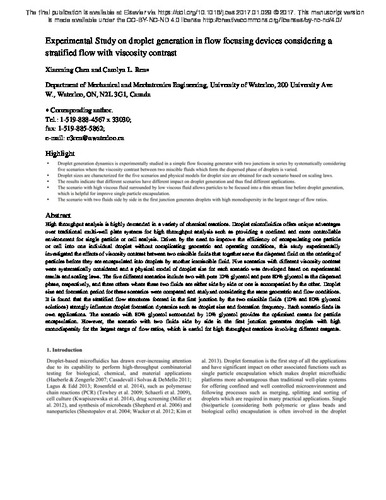 High throughput analysis is highly demanded in a variety of chemical reactions. Droplet microfluidics offers unique advantages over traditional multi-well plate systems for high throughput analysis such as providing a confined and more controllable environment for single particle or cell analysis. Driven by the need to improve the efficiency of encapsulating one particle or cell into one individual droplet without complicating geometric and operating conditions, this study experimentally investigated the effects of viscosity contrast between two miscible fluids that together serve the dispersed fluid on the ordering of particles before they are encapsulated into droplets by another immiscible fluid. Five scenarios with different viscosity contrast were systematically considered and a physical model of droplet size for each scenario was developed based on experimental results and scaling laws. The five different scenarios include two with pure 10% glycerol and pure 80% glycerol as the dispersed phase, respectively, and three others where these two fluids are either side by side or one is accompanied by the other. Droplet size and formation period for these scenarios were compared and analyzed considering the same geometric and flow conditions. It is found that the stratified flow structures formed in the first junction by the two miscible fluids (10% and 80% glycerol solutions) strongly influence droplet formation dynamics such as droplet size and formation frequency. Each scenario finds its own applications. The scenario with 80% glycerol surrounded by 10% glycerol provides the optimized means for particle encapsulation. However, the scenario with two fluids side by side in the first junction generates droplets with high monodispersity for the largest range of flow ratios, which is useful for high throughput reactions involving different reagents. (C) 2017 Elsevier Ltd. All rights reserved.