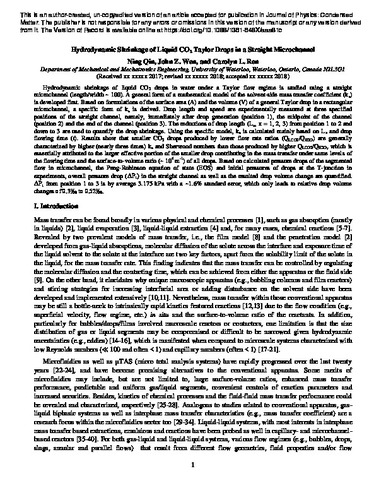 Hydrodynamic shrinkage of liquid CO2 drops in water under a Taylor flow regime is studied using a straight microchannel (length/width similar to 100). A general form of a mathematical model of the solvent-side mass transfer coefficient (k(s)) is developed first. Based on formulations of the surface area (A) and the volume (V) of a general Taylor drop in a rectangular microchannel, a specific form of k(s) is derived. Drop length and speed are experimentally measured at three specified positions of the straight channel, namely, immediately after drop generation (position 1), the midpoint of the channel (position 2) and the end of the channel (position 3). The reductions of drop length (L-x, x = 1, 2, 3) from position 1 to 2 and down to 3 are used to quantify the drop shrinkage. Using the specific model, k(s) is calculated mainly based on Lx and drop flowing time (t). Results show that smaller CO2 drops produced by lower flow rate ratios (Q(LCO2)/Q(H2O)) are generally characterized by higher (nearly three times) ks and Sherwood numbers than those produced by higher Q(LCO2)/Q(H2O), which is essentially attributed to the larger effective portion of the smaller drop contributing in the mass transfer under same levels of the flowing time and the surface-to-volume ratio (similar to 10(4) m(-1)) of all drops. Based on calculated pressure drops of the segmented flow in microchannel, the Peng-Robinson equation of state and initial pressures of drops at the T-junction in experiments, overall pressure drop (Delta P-t) in the straight channel as well as the resulted drop volume change are quantified. Delta P-t from position 1-3 is by average 3.175 kPa with a similar to 1.6% standard error, which only leads to relative drop volume changes of 0.3 parts per thousand to 0.52 parts per thousand.