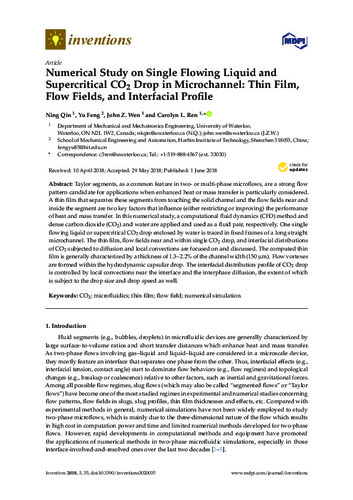 Taylor segments, as a common feature in two- or multi-phase microflows, are a strong flow pattern candidate for applications when enhanced heat or mass transfer is particularly considered. A thin film that separates these segments from touching the solid channel and the flow fields near and inside the segment are two key factors that influence (either restricting or improving) the performance of heat and mass transfer. In this numerical study, a computational fluid dynamics (CFD) method and dense carbon dioxide (CO2) and water are applied and used as a fluid pair, respectively. One single flowing liquid or supercritical CO2 drop enclosed by water is traced in fixed frames of a long straight microchannel. The thin film, flow fields near and within single CO2 drop, and interfacial distributions of CO2 subjected to diffusion and local convections are focused on and discussed. The computed thin film is generally characterized by a thickness of 1.3~2.2% of the channel width (150 &micro;m). Flow vortexes are formed within the hydrodynamic capsular drop. The interfacial distribution profile of CO2 drop is controlled by local convections near the interface and the interphase diffusion, the extent of which is subject to the drop size and drop speed as well.