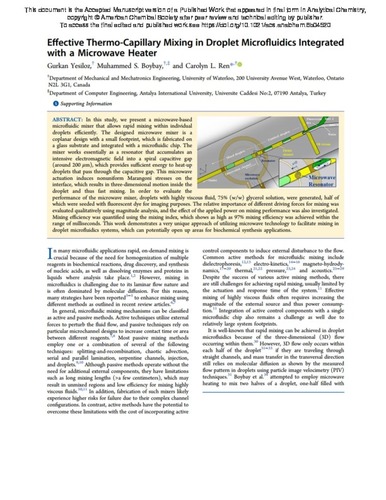 In this study, we present a microwave-based microfluidic mixer that allows rapid mixing within individual droplets efficiently. The designed microwave mixer is a coplanar design with a small footprint, which is fabricated on a glass substrate and integrated with a microfluidic chip. The mixer works essentially as a resonator that accumulates an intensive electromagnetic field into a spiral capacitive gap (around 200 mu m), which provides sufficient energy to heat-up droplets that pass through the capacitive gap. This microwave actuation induces nonuniform Marangoni stresses on the interface, which results in three-dimensional motion inside the droplet and thus fast mixing. In order to evaluate the performance of the microwave mixer, droplets with highly viscous fluid, 75% (w/w) glycerol solution, were generated, half of which were seeded with fluorescent dye for imaging purposes. The relative importance of different driving forces for mixing was evaluated qualitatively using magnitude analysis, and the effect of the applied power on mixing performance was also investigated. Mixing efficiency was quantified using the mixing index, which shows as high as 97% mixing efficiency was achieved within the range of milliseconds. This work demonstrates a very unique approach of utilizing microwave technology to facilitate mixing in droplet microfluidics systems, which can potentially open up areas for biochemical synthesis applications.