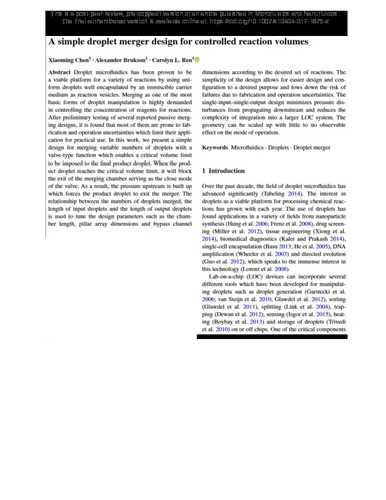 Droplet microfluidics has been proven to be a viable platform for a variety of reactions by using uniform droplets well encapsulated by an immiscible carrier medium as reaction vesicles. Merging as one of the most basic forms of droplet manipulation is highly demanded in controlling the concentration of reagents for reactions. After preliminary testing of several reported passive merging designs, it is found that most of them are prone to fabrication and operation uncertainties which limit their application for practical use. In this work, we present a simple design for merging variable numbers of droplets with a valve-type function which enables a critical volume limit to be imposed to the final product droplet. When the product droplet reaches the critical volume limit, it will block the exit of the merging chamber serving as the close mode of the valve. As a result, the pressure upstream is built up which forces the product droplet to exit the merger. The relationship between the numbers of droplets merged, the length of input droplets and the length of output droplets is used to tune the design parameters such as the chamber length, pillar array dimensions and bypass channel dimensions according to the desired set of reactions. The simplicity of the design allows for easier design and configuration to a desired purpose and lows down the risk of failures due to fabrication and operation uncertainties. The single-input-single-output design minimizes pressure disturbances from propagating downstream and reduces the complexity of integration into a larger LOC system. The geometry can be scaled up with little to no observable effect on the mode of operation.