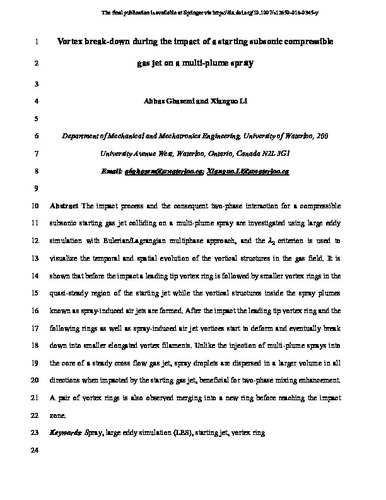 The impact process and the consequent two-phase interaction for a compressible subsonic starting gas jet colliding on a multi-plume spray are investigated using large eddy simulation with Eulerian/Lagrangian multiphase approach, and the λ 2 criterion is used to visualize the temporal and spatial evolution of the vortical structures in the gas field. It is shown that before the impact a leading tip vortex ring is followed by smaller vortex rings in the quasi-steady region of the starting jet while the vortical structures inside the spray plumes known as spray-induced air jets are formed. After the impact the leading tip vortex ring and the following rings as well as spray-induced air jet vortices start to deform and eventually break down into smaller elongated vortex filaments. Unlike the injection of multi-plume sprays into the core of a steady cross flow gas jet, spray droplets are dispersed in a larger volume in all directions when impacted by the starting gas jet, beneficial for two-phase mixing enhancement. A pair of vortex rings is also observed merging into a new ring before reaching the impact zone.Graphical abstract Open image in new window