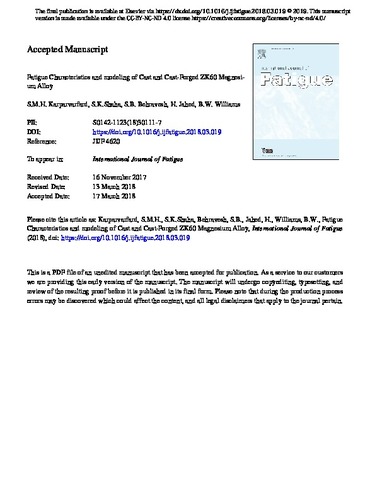 The fatigue behavior of as-cast and cast-forged ZK60 magnesium alloy was investigated via fully-reversed strain controlled fatigue tests at different strain amplitudes. Microstructure analysis, texture measurement, and SEM fracture surface characterization were performed to discern the reason of fatigue behavior improvement via forging, and also to explain the mechanism underlying crack initiation in both cast and cast-forged conditions. It was perceived that the forged alloy contains less amount of porosities and second phase particles in its microstructure. In general, the forged alloy showed longer fatigue life for all strain amplitudes, especially when the strain amplitude is lower than 0.4%. The forging process increased the fatigue strength at 107 cycles from 0.175% to 0.22% strain amplitude. The microstructure obtained after fatigue test showed that twinning can be activated in the cast-forged alloy, once strain amplitude is higher than 0.4%. The interaction of twin bands with the grain boundaries can also adversely affect the fatigue life of the forged alloy. Also, the residual twins can develop tensile mean stress which affects the fatigue life negatively. Finally, the Coffin-Manson fatigue model and an energy-based fatigue model were employed to model the life of as-cast and cast-forged materials. While some of the predicted lives by the former were out of the ±2× boundary bounds, the latter’s results were tightly clustered in ±1.5× bounds.