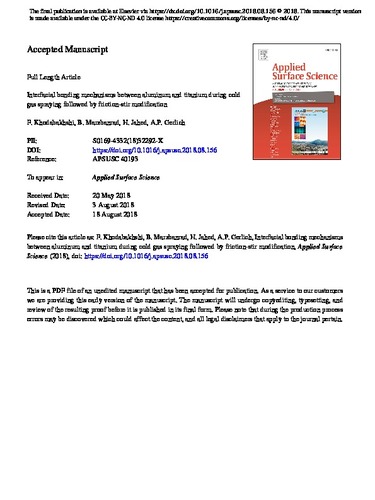 This paper closely evaluates the interfacial bonding mechanism between titanium particles deposited on an aluminum alloy substrate by cold gas spraying followed by friction-stir processing (FSP). After cold spraying and FSP modification, the produced Al/Ti interface was studied using focus ion beam-transmission electron microscopy (FIB-TEM) analysis and auger electron spectroscopy. Formation of a well-bonded titanium aluminide reaction layer was observed at the interface with a thickness in the range of 10–20 nm and a coherent interface associated with an inter-diffusion distance of about 600 nm. The results of this study showed that the physical bonding phenomenon during cold spraying according to the well-known adiabatic shear instability at the interface can be associated with chemical bonding and formation of an intermetallic layer at the interface during FSP modification. This is aided by the induced thermo-mechanical processing and deformation-assisted solid-state diffusion-based reactions. Also, these possible interfacial bonding and intermetallic layer formation mechanisms were discussed based on the inter-diffusion of elements at the Al/Ti interface based on the well-established Boltzmann-Matano theory and kinetics models correlated with experimental observations. The main findings of this research highlight the role of FSP on the performance of cold spray coatings as a post-processing technique to promote densification and homogenization during processing by promoting nano-scale interfacial mechanisms and chemical bonding at the interface.