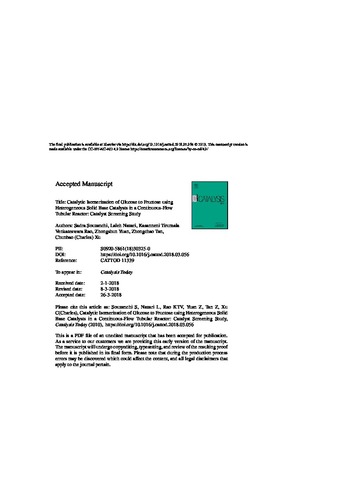 Isomerization reactions of glucose into fructose in aqueous media were studied in a continuous-flow tubular reactor using different heterogeneous solid base catalysts, including calcined-rehydrated hydrotalcite, magnesium oxide, Amberlyst A21 ion exchange resin and two commercial hydrotalcite catalysts. The catalysts were characterized and their activities for glucose isomerization were compared. The most active catalyst was found to be magnesium oxide, which showed the highest glucose conversion (36.3%) and highest fructose yield (22.8%) at 100 °C. Among all catalysts, the calcined-rehydrated hydrotalcite showed the highest selectivity towards fructose, reaching 78% at 100 °C. It was also found that increasing the reaction temperature had positive effects on glucose conversion and fructose yield for both activated hydrotalcite and MgO catalysts. The fructose yield at 120 °C attained 19.5% and 25.1% with the activated hydrotalcite and MgO catalysts, respectively. The catalytic activity of hydrotalcite calcined at 450 °C for glucose isomerization reaction was found to be greater that calcined at 350 °C. The hyrdotalcite and magnesium oxide catalysts were observed to be stable in the four hours of continuous tests on stream. TGA analyses of the used catalysts proved the formation of undesired insoluble by-products, mainly humins, on the surface of the used catalysts.