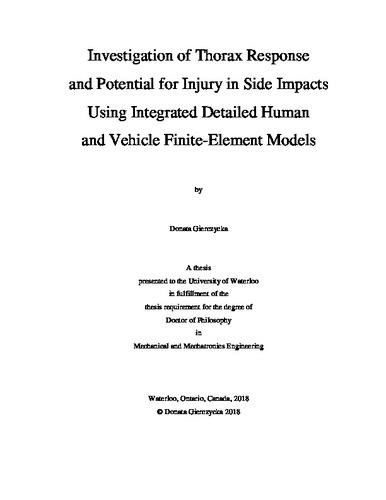 Car accidents are amongst the most common causes of fatalities for a younger population in developed countries and world-wide. While research using Anthropometric Test Devices (ATDs) has led to improvements in frontal impact occupant protection, epidemiological data on the effectiveness of devices for side impact protection remains inconclusive. Current regulatory physical side impact tests are limited to standardized full-vehicle Moving Deformable Barrier and rigid pole impacts, only one seating position of the occupant, and a unidirectional occupant surrogate (side impact ATD). To address some limitations of the existing research methods, and expand the understanding of the occupant response and potential for injury, numerical Human Body Models (HBMs) have been developed as repeatable, biofidelic, omni-directional, and frangible occupant surrogates. The overall goal of this study was to improve the understanding of the underlying sources of conflicting epidemiological and physical test data on thoracic response in side impacts. This study applied two highly detailed HBMs in parametric investigations with simple to complex impact scenarios ranging from a pendulum, rigid-wall side sled, to a full-vehicle lateral impact and an accident reconstruction. Subsequently, a thoracic side airbag and three-point seatbelt models were developed and integrated with the vehicle model to study the effect of occupant pre-crash position on the potential for injury. Occupant response assessment included global criteria (chest deflection and viscous criterion), local measurements at different thorax levels, spine kinematics, and prediction of rib fracture locations and lung response. This research identified limitations in current analysis methods, demonstrating effects on occupant response of pre-crash arm position, which is known to vary widely among occupants. The magnitude of the arm effect was dependent on the lateral impact scenario, where the occupant response demonstrated the highest sensitivity to arm orientation in the full vehicle impact. The arm position effect was more significant than changes in response to four restraint combinations, where the assessment of the restraint performance was also dependent on the thoracic response measurement locations and method. A parametric study using detailed HBM, vehicle and restraint models provided new understanding of occupant response in side impact crash scenarios.