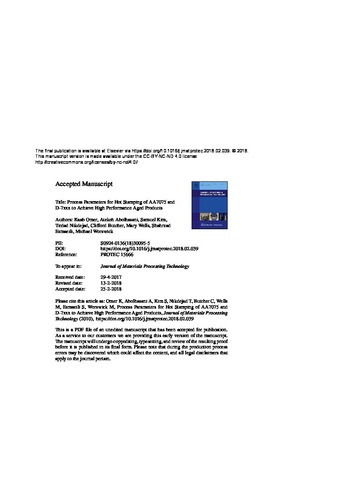 This work examines the necessary process parameters for die quenching (DQ) during hot stamping and subsequent age hardening and paint bake cycle (PBC) response for two alloys: AA7075 and a developmental 7xxx alloy (referred to as AA7xxx), with a lower Chromium content, higher Zirconium content and higher Zinc-to-Magnesium ratio in comparison to AA7075. For both alloys, a minimum solutionizing time of 8?min was found to be required, along with a minimum quench rate of 56?°C/s and 27?°C/s for AA7075 and AA7xxx, respectively. Two-step aging treatments, leveraging a paint bake cycle (PBC) of 177?°C for 30?min as the second step, were considered after die quenching and were devised to achieve T6- or T76-level strengths. For AA7075, an aging treatment of 120?°C for 8?h, followed by the paint bake cycle (PBC) produced strength levels similar to a T6 temper. DSC experiments showed that the microstructure from this heat treatment was similar to a peak-aged T6 temper. For AA7xxx, a treatment of 100?°C for 4?h and followed by the paint bake produced a strength similar to a T76 temper, while 120?°C for 3?h followed by the paint bake yielded T6 strength levels. The properties of the custom aging treatments were validated through tensile tests. The resulting stress-strain curves show that it is possible to achieve T6 or T76 properties using a custom aging treatment incorporating the PBC that is 65–83% shorter than standard T6 or T76 treatments.