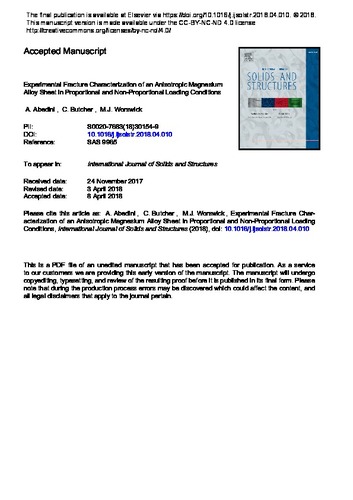 A comprehensive experimental investigation was performed to characterize the fracture behaviour of a rare-earth magnesium alloy sheet, ZEK100-O, under both proportional and non-proportional loading conditions. This material possesses severe plastic anisotropy and tension-compression asymmetry that evolve with plastic deformation and is an excellent candidate to experimentally evaluate phenomenological fracture modelling strategies. Different types of specimen geometries were fabricated in different orientations with respect to the rolling direction of the sheet to reveal the anisotropic fracture response of the alloy. Moreover, three different types of plane-strain tension tests, namely, v-bend, butterfly, and Nakazima dome tests were conducted and compared in terms of their applicability for fracture characterization of sheet materials. To visualize directional dependency of the fracture response of the magnesium alloy, experimental fracture loci for different orientations were constructed. Furthermore, non-proportional tests were performed in which abrupt changes in stress state were imposed to study the role of the loading history on fracture behaviour of the alloy. The non-proportional tests entailed pre-straining the material in uniaxial and equi-biaxial tension up to a prescribed plastic work level, followed by extreme strain path changes to plane-strain tension and shear states. Non-proportional deformations with such severe strain path variations have not been reported in the literature for materials with complex anisotropic behaviour such as ZEK100-O. The results of which have enabled the direct experimental evaluation of phenomenological damage models without performing an inverse calibration from finite element simulations. Based on the results of the non-proportional tests, it was shown that simple damage indicators were unable to describe the influence of severe changes in the strain path on fracture.