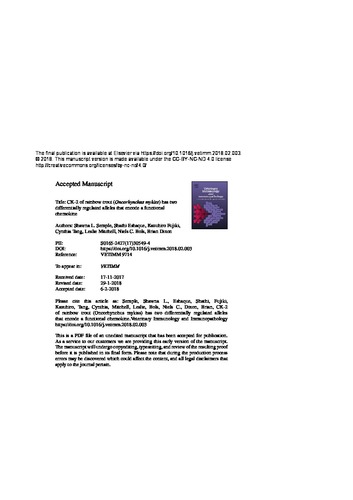 Rainbow trout chemokine 2 (CK-2) is currently the only known CC chemokine to have a mucin stalk. Further analysis of the mucin stalk region revealed a second, related CC chemokine sequence, denoted here as CK-2.1. This second sequence was determined to be an allele of CK-2 following genomic PCR analysis on several outbred individuals. Furthermore, in both in vivo and in vitro trials, CK-2 and CK-2.1 were both present, but appeared to have differential tissue expression in both control and PHA stimulated samples. Upon the development of a polyclonal antibody to rCK-2, CK-2 was only observed in the brain, liver and head kidney of PHA stimulated rainbow trout tissues. In comparison, when using the rainbow trout monocyte/macrophage-like cell line, RTS-11, CK-2 protein was observed in both control and PHA stimulated conditions. When studying the function of CK-2, a chemotaxis assay revealed that both peripheral blood leukocytes and RTS-11 cells migrated towards rCK-2 significantly at all concentrations studied when compared to truncated β2m. Interestingly, this migration was lowest at both the highest concentration and the lowest concentrations of CK-2. Thus, teleostean chemokine receptors may become desensitized when overstimulated as has been observed in mammalian models. The observed chemotactic function was indeed due to rCK-2 as cell migration was inhibited through pre-treatment of both the cells and the polyclonal antibody with rCK-2. As has been observed thus far with all other chemokines, CK-2 does appear to function through binding to a G-coupled protein receptor as chemotaxis could be inhibited through pre-treatment with pertussis toxin. Overall, the results of this study indicate that CK-2 is a functional chemokine that is encoded by two differentially expressed alleles in rainbow trout, CK-2 and CK-2.1.