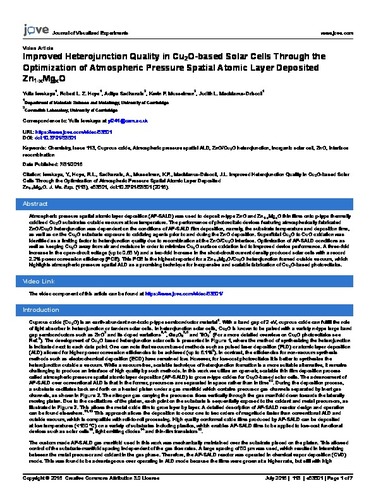 Atmospheric pressure spatial atomic layer deposition (AP-SALD) was used to deposit n-type ZnO and Zn1-xMgxO thin films onto p-type thermally oxidized Cu2O substrates outside vacuum at low temperature. The performance of photovoltaic devices featuring atmospherically fabricated ZnO/Cu2O heterojunction was dependent on the conditions of AP-SALD film deposition, namely, the substrate temperature and deposition time, as well as on the Cu2O substrate exposure to oxidizing agents prior to and during the ZnO deposition. Superficial Cu2O to CuO oxidation was identified as a limiting factor to heterojunction quality due to recombination at the ZnO/Cu2O interface. Optimization of AP-SALD conditions as well as keeping Cu2O away from air and moisture in order to minimize Cu2O surface oxidation led to improved device performance. A three-fold increase in the open-circuit voltage (up to 0.65 V) and a two-fold increase in the short-circuit current density produced solar cells with a record 2.2% power conversion efficiency (PCE). This PCE is the highest reported for a Zn1-xMgxO/Cu2O heterojunction formed outside vacuum, which highlights atmospheric pressure spatial ALD as a promising technique for inexpensive and scalable fabrication of Cu2O-based photovoltaics.