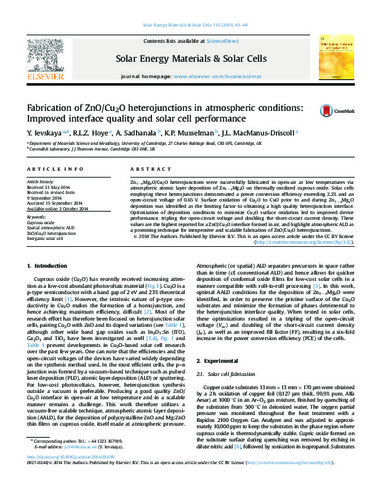 Zn1−xMgxO/Cu2O heterojunctions were successfully fabricated in open-air at low temperatures via atmospheric atomic layer deposition of Zn1−xMgxO on thermally oxidized cuprous oxide. Solar cells employing these heterojunctions demonstrated a power conversion efficiency exceeding 2.2% and an open-circuit voltage of 0.65V. Surface oxidation of Cu2O to CuO prior to and during Zn1−xMgxO deposition was identified as the limiting factor to obtaining a high quality heterojunction interface. Optimization of deposition conditions to minimize Cu2O surface oxidation led to improved device performance, tripling the open-circuit voltage and doubling the short-circuit current density. These values are the highest reported for a ZnO/Cu2O interface formed in air, and highlight atmospheric ALD as a promising technique for inexpensive and scalable fabrication of ZnO/Cu2O heterojunctions.