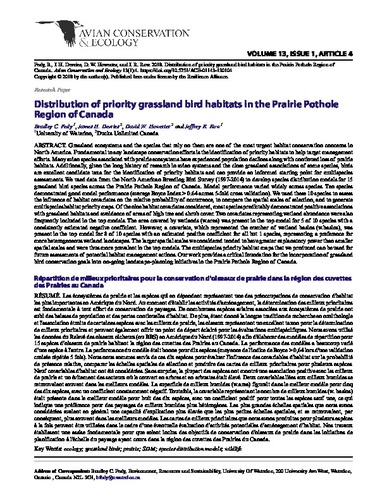 Grassland ecosystems and the species that rely on them are one of the most urgent habitat conservation concerns in North America. Fundamental to any landscape conservation efforts is the identification of priority habitats to help target management efforts. Many avian species associated with prairie ecosystems have experienced population declines along with continued loss of prairie habitats. Additionally, given the long history of research in avian systems and the close grassland associations of some species, birds are excellent candidate taxa for the identification of priority habitats and can provide an informed starting point for multispecies assessments. We used data from the North American Breeding Bird Survey (1997-2014) to develop species distribution models for 15 grassland bird species across the Prairie Pothole Region of Canada. Model performance varied widely across species. Ten species demonstrated good model performance (average Boyce Index > 0.64 across 5-fold cross validation). We used these 10 species to assess the influence of habitat covariates on the relative probability of occurrence, to compare the spatial scales of selection, and to generate multispecies habitat priority maps. Of the nine habitat covariates considered, most species predictably demonstrated positive associations with grassland habitats and avoidance of areas of high tree and shrub cover. Two covariates representing wetland abundance were also frequently included in the top models. The area covered by wetlands (w.area) was present in the top model for 5 of 10 species with a consistently estimated negative coefficient. However, a covariate, which represented the number of wetland basins (w.basins), was present in the top model for 8 of 10 species with an estimated positive coefficient for all but 1 species, representing a preference for more heterogeneous wetland landscapes. The larger spatial scales we considered tended to have greater explanatory power than smaller spatial scales and were thus more prevalent in the top models. The multispecies priority habitat maps that we produced can be used for future assessments of potential habitat management actions. Our work provides a critical foundation for the incorporation of grassland bird conservation goals into on-going landscape-planning initiatives in the Prairie Pothole Region of Canada.