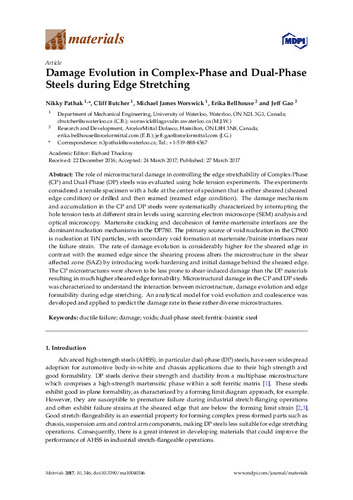 The role of microstructural damage in controlling the edge stretchability of Complex-Phase (CP) and Dual-Phase (DP) steels was evaluated using hole tension experiments. The experiments considered a tensile specimen with a hole at the center of specimen that is either sheared (sheared edge condition) or drilled and then reamed (reamed edge condition). The damage mechanism and accumulation in the CP and DP steels were systematically characterized by interrupting the hole tension tests at different strain levels using scanning electron microscope (SEM) analysis and optical microscopy. Martensite cracking and decohesion of ferrite-martensite interfaces are the dominant nucleation mechanisms in the DP780. The primary source of void nucleation in the CP800 is nucleation at TiN particles, with secondary void formation at martensite/bainite interfaces near the failure strain. The rate of damage evolution is considerably higher for the sheared edge in contrast with the reamed edge since the shearing process alters the microstructure in the shear affected zone (SAZ) by introducing work-hardening and initial damage behind the sheared edge. The CP microstructures were shown to be less prone to shear-induced damage than the DP materials resulting in much higher sheared edge formability. Microstructural damage in the CP and DP steels was characterized to understand the interaction between microstructure, damage evolution and edge formability during edge stretching. An analytical model for void evolution and coalescence was developed and applied to predict the damage rate in these rather diverse microstructures.