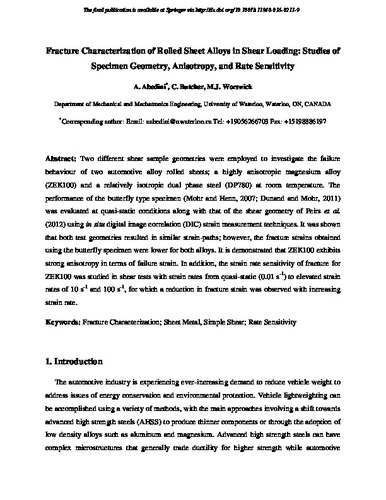 Two different shear sample geometries were employed to investigate the failure behaviour of two automotive alloy rolled sheets; a highly anisotropic magnesium alloy (ZEK100) and a relatively isotropic dual phase steel (DP780) at room temperature. The performance of the butterfly type specimen (Mohr and Henn Exp Mech 47:805–820, 16; Dunand and Mohr Eng Fract Mech 78:2919-2934, 17) was evaluated at quasi-static conditions along with that of the shear geometry of Peirs et al Exp Mech 52:729-741, (27) using in situ digital image correlation (DIC) strain measurement techniques. It was shown that both test geometries resulted in similar strain-paths; however, the fracture strains obtained using the butterfly specimen were lower for both alloys. It is demonstrated that ZEK100 exhibits strong anisotropy in terms of failure strain. In addition, the strain rate sensitivity of fracture for ZEK100 was studied in shear tests with strain rates from quasi-static (0.01 s−1) to elevated strain rates of 10 and 100 s−1, for which a reduction in fracture strain was observed with increasing strain rate.