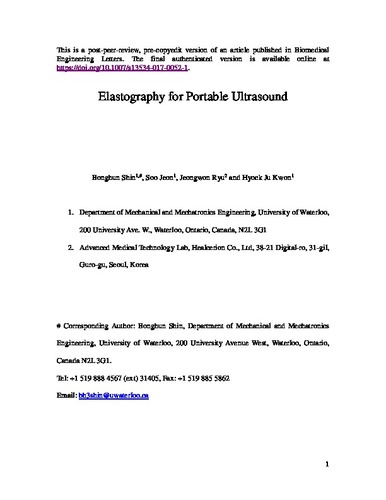 Portable wireless ultrasound has been emerging as a new ultrasound device due to its unique advantages including small size, lightweight, wireless connectivity and affordability. Modern portable ultrasound devices can offer high quality sonogram images and even multiple ultrasound modes such as color Doppler, echocardiography, and endovaginal examination. However, none of them can provide elastography function yet due to the limitations in computational performance and data transfer speed of wireless communication. Also phase-based strain estimator (PSE) that is commonly used for conventional elastography cannot be adopted for portable ultrasound, because ultrasound parameters such as data dumping interval are varied significantly in the practice of portable ultrasound. Therefore, this research aims to propose a new elastography method suitable for portable ultrasound, called the robust phase-based strain estimator (RPSE), which is not only robust to the variation of ultrasound parameters but also computationally effective. Performance and suitability of RPSE were compared with other strain estimators including time-delay, displacement-gradient and phase-based strain estimators (TSE, DSE and PSE, respectively). Three types of raw RF data sets were used for validation tests: two numerical phantom data sets modeled by an open ultrasonic simulation code (Field II) and a commercial FEA (Abaqus), and the one experimentally acquired with a portable ultrasound device from a gelatin phantom. To assess image quality of elastograms, signal-to-noise (SNRe) and contrast-to-noise (CNRe) ratios were measured on the elastograms produced by each strain estimator. The computational efficiency was also estimated and compared. Results from the numerical phantom experiment showed that RPSE could achieve highest values of SNRe and CNRe (around 5.22 and 47.62 dB) among all strain estimators tested, and almost 10 times higher computational efficiency than TSE and DSE (around 0.06 vs. 5.76 seconds per frame for RPSE and TSE, respectively).