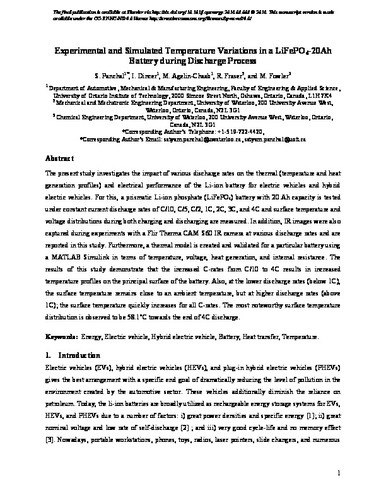 The present study investigates the impact of various discharge rates on the thermal (temperature and heat generation profiles) and electrical performance of the Li-ion battery for electric vehicles and hybrid electric vehicles. For this, a prismatic Li-ion phosphate (LiFePO4) battery with 20Ah capacity is tested under constant current discharge rates of C/10, C/5, C/2, 1C, 2C, 3C, and 4C and surface temperatures and voltage distributions during both charging and discharging are measured. In addition, IR images were also captured during experiments with a Flir Therma CAM S60 IR camera at various discharge rates and are reported in this study. Furthermore, a thermal model is created and validated for a particular battery using a MATLAB Simulink in terms of temperature, voltage, heat generation, and internal resistance. The results of this study demonstrate that the increased C-rates from C/10 to 4C result in increased temperatures on the principal surface of the battery. Also, at the lower discharge rates (below 1C), the surface temperature remains close to the ambient temperature, but at higher discharge rates (above 1C); the surface temperature quickly increases for all C-rates. The most noteworthy surface temperature distribution is observed to be 58.1°C towards the end of 4C discharge.