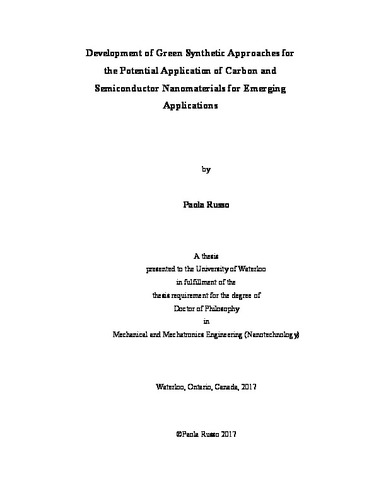 The increasing interest towards the synthesis and modification of different nanomaterials is attributed to their outstanding mechanical, physical and electrical properties that allow their use in different fields. In the last decades, novel nanomaterials have been successfully synthesized in order to provide materials with improved performances to be employed for water treatment, photocatalysis, to replace silicon–based devices in electronics and so on. For example, carbon-based materials are promising candidates for the fabrication of conductive inks and future non-volatile memory devices. However, the absence of an eco-sustainable, straightforward and time effective process for their production has hindered their large-scale application in electronics. The aim of this thesis is to explore alternative synthetic approaches for the synthesis of different materials and their structural modification in order to gain a better understanding how the processes could be controlled to have desired structure and hence materials with improved performances. In particular, laser ablation in liquids (PLA) and electrochemical processes will be the focus of this study. It has been shown that pulsed laser ablation of carbon materials and TiO2¬ nanoparticles can be used for the synthesis of new materials and/or modification of their structure. The laser ablation compared to other common synthetic approaches has many advantages. One of which is the eco-sustainability of the process, since the synthesis is performed in water without the use or production of products harmful for the environment. The second advantage is the versatility of the technique that allows the synthesis and modification of different nanomaterials depending on the target material employed. In this thesis it will be demonstrated that laser ablation of a dispersion of graphene oxide can be employed as a straightforward technique to induce structural modifications of the material, i.e. reduction of the graphene oxide sheets and synthesis of graphene quantum dots varying laser ablation time and ablation power. The nanomaterials obtained can be mixed with silver nanoparticles for the fabrication of hybrid conductive inks, which have a resistivity lower than inks made with only silver nanoparticles. The versatility of the laser ablation is demonstrated by extending the study to titanium dioxide powders. It will be discussed that the laser ablation of TiO2 nanoparticles leads to nanoparticles with different crystalline structures. Indeed, with a proper control over the laser ablation parameters, such as ablation time and laser power, it is possible to induce a phase transformation of TiO¬2 nanoparticles whether they are dispersed in water or deposited onto a substrate. Similar to the laser ablation, the electrochemical processes such as the electrophoretic deposition (EPD) allows the synthesis and deposition of different type of materials. In particular, in this thesis this technique will be employed for the straightforward synthesis of carbon nanowalls (CNWs). These carbon-based materials are usually synthesized by chemical vapor deposition, which requires the use of precursor gases and high temperatures and pressures. Whereas, the method developed during my research allows a time-effective synthesis of these nanomaterials; moreover, the deposition of the CNWs directly onto conductive substrate permits for the first time the fabrication of carbon-based resistive switching memory devices. This technique could be used for the development on a large scale of this type of devices, whose broad fabrication has been hindered due to the complex production mechanisms. Another advantage of the electrochemical processes is the possibility of modifying the chemical composition of the materials. In this thesis, the anodic oxidation has been used for the first time to oxidize the carbon structures obtained by EPD in order to engineer their electrical performances. In literature, the anodic oxidation has been used to study the redox processes in electronic devices or to increase the electrochemical capacitance of carbon materials, but never as a specific technique to tailor the materials properties. As aforementioned EPD, like PLA, is a versatile technique and in this study it has been used for the growth of ZnO rods. ZnO rods are usually grown by hydrothermal processes, which can be time consuming. In this thesis, the growth of the rods has been conducted directly on conductive substrates, which were then patterned for the fabrication of electronic devices.