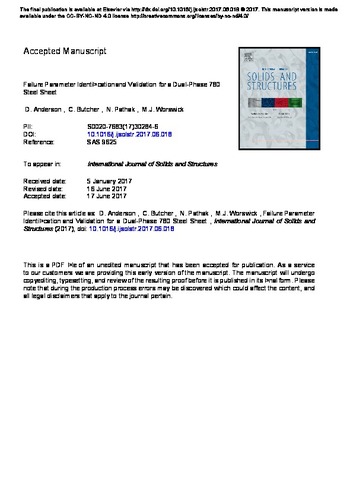 A hybrid experimental-numerical procedure was implemented to determine the failure surface of a dual-phase 780 steel sheet as a function of the effective plastic strain, triaxiality, and Lode parameter using butterfly specimens with in situ digital image correlation strain measurement and supporting finite element calculations. A butterfly-type test specimen was employed to experimentally obtain stress states ranging from simple shear to plane strain tension including mixed tensile and shear loading. The numerically-derived failure surface was implemented into the phenomenological GISSMO damage model in the commercial finite element code LS-DYNA and the accuracy of the failure surface was determined using finite element predictions of the characterization experiments. A series of independent validation experiments related to sheet metal forming were performed including a hole tension test, a conical and flat punch hole expansion test, and a hemispherical punch test. The finite element models utilizing the damage model were able to accurately reproduce the load–displacement and surface strains of the sheet material for both the characterization and validation experiments. Prediction of the failure orientation and location compared favorably to each of the validation tests.