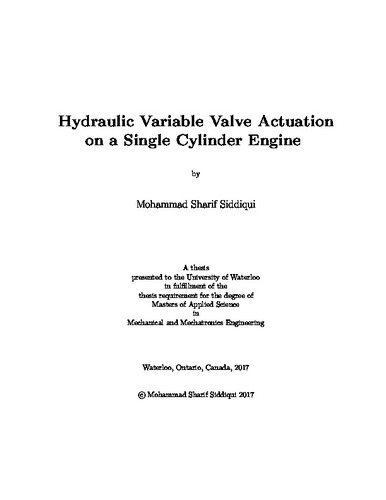 The combustion characteristics in an engine cylinder can greatly change over a range of speeds and loads. However, conventional engines x the timing and amount of intake and exhaust, which can lead to higher emissions, wasted fuel, and lower power output. This thesis studies the application of a hydraulics based variable valve actuation system to change the valves' lift and timing on a single cylinder spark ignition engine. In addition to controlling the valve actuation, a hydraulics based design has the advantage of protecting against engine failure in cases of electrical power loss, reverting the system to behave as a conventional camshaft valve train. The research extends the previous iterations of the hydraulics design to prevent leakage, retain pressure, and reliably open and close the engine valves. A hydraulic cylinder is used to replace the conventional cam where pressurized fluid opens, and spring force closes, the engine valve. The pressurized fluid is supplied to, or removed from, the cylinder using rotary spool valves coupled to the engine crankshaft. Additionally, the system is modelled in Simulink to determine the effect of system pressure, flow area, and spring rate on the resulting valve pro file. After modelling the system's performance for achieving variable lift and timing, the system was designed, manufactured, and tested on a single cylinder engine with the aid of a dynamometer. Experimental results for valve lift showed good agreement with the simulation models. Majority of the tests were performed using manual control, followed by experiments with active control of the system pressure to reach a desired valve lift. The lift controller is able to achieve the desired valve actuation in under 2 seconds with active pressure feedback. Lastly, the ability of the hydraulic variable valve system as a viable alternative is shown by achieving combustion at 1500 RPM engine idle speed.