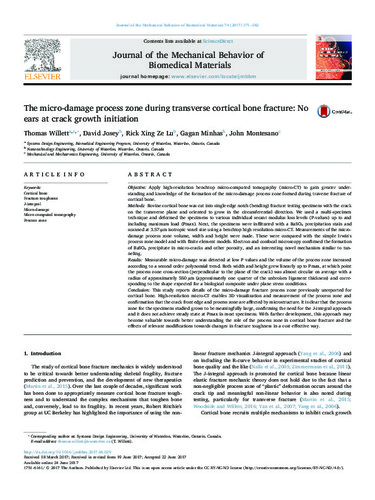 Apply high-resolution benchtop micro-computed tomography (micro-CT) to gain greater understanding and knowledge of the formation of the micro-damage process zone formed during traverse fracture of cortical bone. Bovine cortical bone was cut into single edge notch (bending) fracture testing specimens with the crack on the transverse plane and oriented to grow in the circumferential direction. We used a multi-specimen technique and deformed the specimens to various individual secant modulus loss levels (P-values) up to and including maximum load (Pmax). Next, the specimens were infiltrated with a BaSO4 precipitation stain and scanned at 3.57-μm isotropic voxel size using a benchtop high resolution-micro-CT. Measurements of the micro-damage process zone volume, width and height were made. These were compared with the simple Irwin's process zone model and with finite element models. Electron and confocal microscopy confirmed the formation of BaSO4 precipitate in micro-cracks and other porosity, and an interesting novel mechanism similar to tunneling. Measurable micro-damage was detected at low P values and the volume of the process zone increased according to a second order polynomial trend. Both width and height grew linearly up to Pmax, at which point the process zone cross-section (perpendicular to the plane of the crack) was almost circular on average with a radius of approximately 550µm (approximately one quarter of the unbroken ligament thickness) and corresponding to the shape expected for a biological composite under plane stress conditions. This study reports details of the micro-damage fracture process zone previously unreported for cortical bone. High-resolution micro-CT enables 3D visualization and measurement of the process zone and confirmation that the crack front edge and process zone are affected by microstructure. It is clear that the process zone for the specimens studied grows to be meaningfully large, confirming the need for the J-integral approach and it does not achieve steady state at Pmax in most specimens. With further development, this approach may become valuable towards better understanding the role of the process zone in cortical bone fracture and the effects of relevant modifications towards changes in fracture toughness in a cost effective way.